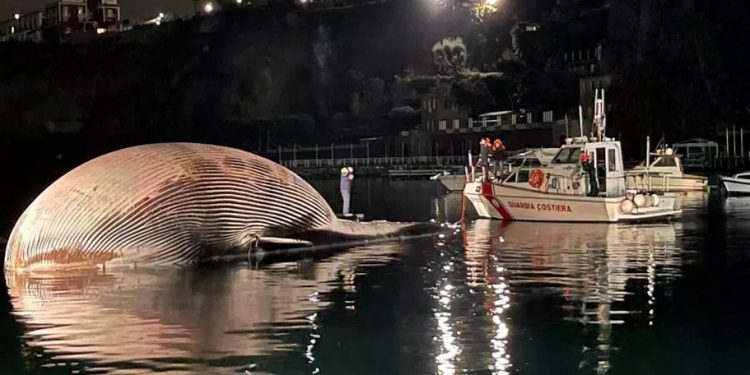 The Italian Coast Guard announced via a Facebook post that they discovered the remains of a massive finback whale near the Italian port of Sorrento during the week. The officials said they found the remains on Sunday and promptly transferred it to the port at Naples.

When measured, the whale was about 65 feet (20 meters) long and is believed to weigh over 77 tons (70 metric tons). According to the authorities, this makes the dead whale one of the largest that has ever been found in the Mediterranean Sea.

The attention of the Coast Guard officials was first brought to the dead whale when a young calf swam to the surface of the Sorrento harbor, looking distressed. It was said to have repeatedly hit its head against the walls of the harbor before going back underwater. To find out the source of the calf’s distress, Coast Guard divers followed it, only to discover the remains of the dead whale.

Experts said the distressed young calf might be a progeny of the dead whale. The Coast Guard has been on the lookout for the young whale, expecting it to swim back to the surface anytime soon. Officials plan to carry out a necropsy to determine what led to the death of the enormous whale. The Coast Guard said that the whale’s skeleton will also be put up for display in a museum, Live Science reports.

Finback whales, otherwise known as fin whales, are the second-largest animals on the planet, second only to the blue whale. According to information from the National Oceanic and Atmospheric Administration (NOAA), at their advanced stage, they can be 85 feet (25 meters) long, weighing about 80 tons (72 metric tons). The largest blue whales weigh around 150 tons and can grow to be up to 110 feet long.

Due to the activities of poachers over the years, the finback whale has been added to the list of endangered marine species. Although different countries around the world have instituted regulations to stem the tide of commercial whaling, boat strikes continue to pose huge threats to the population of finback whales.