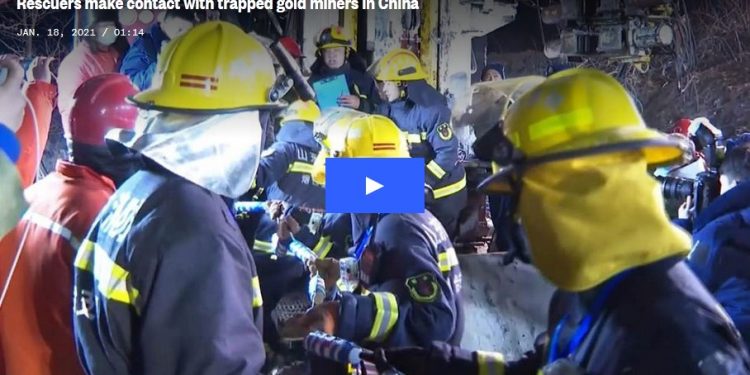 A gold mine collapsed in the eastern part of China’s Shandong province on January 10 after an explosion, local media said. Twenty-two miners were trapped underground, and as of Tuesday, nine days after the explosion, rescue teams are still working to save the lives of the trapped miners. According to reports, rescuers were able to send the trapped miners supplies such as food, water, and medicine on Monday.

The team of rescuers is trying to cut through the metals, rubble, and ore that are in the cages so that they can extract the miners. The team was also able to send them some blankets and porridge, according to reports.

A local media outlet reported on Sunday that the rescue team was notified about the presence of trapped survivors of the explosion after some of them felt someone tugging on the iron ropes that the rescuers had sent into the mine and heard knocking sounds from deep in the mine. The miners were able to send the rescue team a note on Monday morning, revealing that 12 of them were together and alive.

The underground trap has no air circulation and might soon be filled up with large pool water, according to the note. The miners also added some other medical supplies that they need to keep the wounded alive till they are rescued. According to reports, four of the miners are injured and three are hypertensive.

“Please continue your effort in trying to save us, we still have a hope of leaving here alive,” the miners wrote in the note, report says.

The fate of the other 10 miners is unknown as the miners stated that they are only 12 clustered together in the underground trap. Since Monday after a phone line was set up, rescuers have been able to speak directly with the men on two occasions.

The country was previously plagued with many mining-related accidents which led to at least 5,000 yearly deaths. Recently, the safety standards in mines were increased through better supervision, but the accidents have persisted, encouraged by increased demands for precious gems and coal in the country. In meeting up with the demand, many mines are forgoing safety practices and embracing cost-cutting methods.