Texas Lawyer Appears in Zoom Court Proceeding as a Cat; Says He’s Not a Real Cat 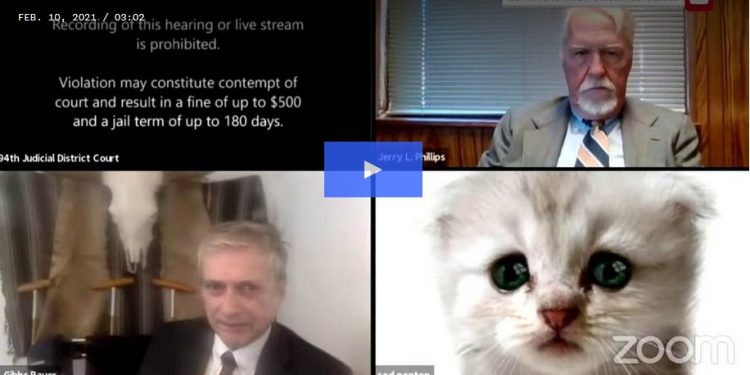 As a result of the pandemic, more and more people have had to rely on virtual meetings to stay connected while being safe. This has been of great help to everyone, but there are a few cases where things do not go as planned. A perfect example is a viral video that shows a Texas lawyer appearing in a Zoom meeting as a cat. No, he didn’t wear a cat costume but erroneously used a cat filter on his Zoom profile and that was what everyone could see.

The court hearing, which was held on Tuesday in southwest Texas, showed a Presidio Country lawyer, Rod Ponton, appearing as a cat, something which baffled the judge and the other lawyers. Judge Roy Ferguson tried to save the situation by informing Ponton that he appeared as a cat, but the confused lawyer added to the comical situation by urging that the civil forfeiture proceedings continue, adding that it was a human and not a cat talking.

“Let’s proceed please, I am here, and I am not a cat,” Ponton said.

At the beginning of the viral video, it is clear that Ponton is having difficulties removing the filter and though the judge tried to walk him through how he could do that, he did not get the process right. After the judge states that he should try to remove the cat filter by checking the Zoom setting on the device, Ponton states that his assistant has been trying to do that but the filter persisted.

Judge Ferguson tweeted about the funny situation, warning people to ensure that they check their Zoom filter before joining a meeting, in this case, a hearing, on the video meeting platform. In the humorous tweet, Ferguson proclaimed that a cat, in reference to cat-filtered Ponton, was involved in and even made an announcement in his courtroom.

The judge also applauded the lawyer and many others who were trying to ensure that civil proceedings are not put on hold even with the situation in the country and the world at large.

“We get some of the funny situations that show us the extent to which legal professionals will go to ensure that the justice system is not suspended,” Ferguson wrote on Twitter. “All the people involved were very dignified and professional about the issue and Ponton was equally very grateful.”

According to reports, Ponton’s legal team had to relocate and in the mess, he had to use his secretary’s computer for the hearing. Ponton told reporters that he was happy he could provide a funny respite from all the tension people are passing through as a result of the pandemic and the multiple restrictions that come with it.

“With our continuous dependent on computers to keep in touch, such funny episodes are to be expected,” he added.

Target's Workout Clothes Brand, All in Motion, Amasses $1 billion in One Year of Sales