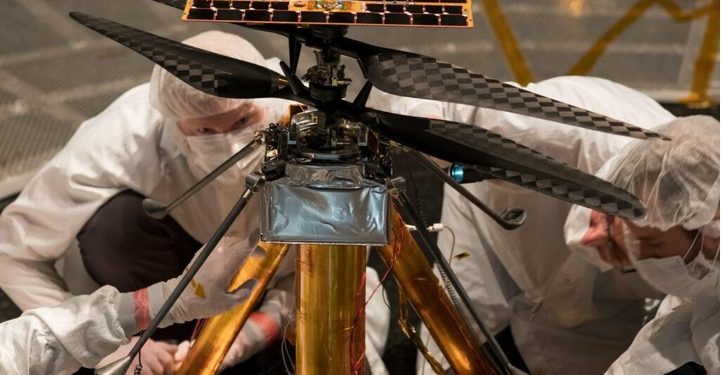 The seven months journey of Ingenuity, the first helicopter on Mars, is about to end after spending about six months in the belly of Perseverance, NASA’s Mars-exploring rover. NASA says Ingenuity and Perseverance will arrive on Mars in a little over twenty days. This historic development will open the doors for the many types of research that will, one day, lead to the settlement of humans on the red planet.

The United States has not had a mission sent to Mars since InSight, a lander that was used to convey a seismometer to Mars in 2018. Perseverance which started its journey in July 2020 will be used to sniff out signs of the possibility of previous life on the red planet. The helicopter will also be used to experiment with the possibility and feasibility of air travel in the very light atmosphere of Mars. The UAE and China also sent missions to the planet in 2020.

The groundbreaking helicopter is the first of its kind in space. NASA explained that as the first aircraft in space, Ingenuity will help future missions by providing aerial dimensions for space flights. This and other feats that Ingenuity can achieve will be dependent on its ability to operate in the Martian cold temperatures and light atmosphere. The atmosphere is about 90% less dense than what we have here on Earth, NASA reports.

Ingenuity is a test flight, and it is just as big as a fairly big drone. It has two layers of rotors made up of four blades that rotate in different directions. The blades will rotate at a speed of about 2,400 rpm, much more than will be required for a device its size on Earth. The high speed and large blades will allow the helicopter to maneuver its way on the red planet.

If the mission is a success, scientists will have more information needed for the exploration of Mars and other terrestrial planets. This is because space agencies have had to depend on rovers, which might have a few advantages, but are disadvantaged when it comes to speed.  A faster vehicle for exploration will hasten the timetable for human settlement on the planet. NASA will use data from Ingenuity’s performance to create more aircraft designs for space.

All we have to look forward to now is Perseverance safely landing on Mars and Ingenuity rotating its blades to explore the secrets of the planet.