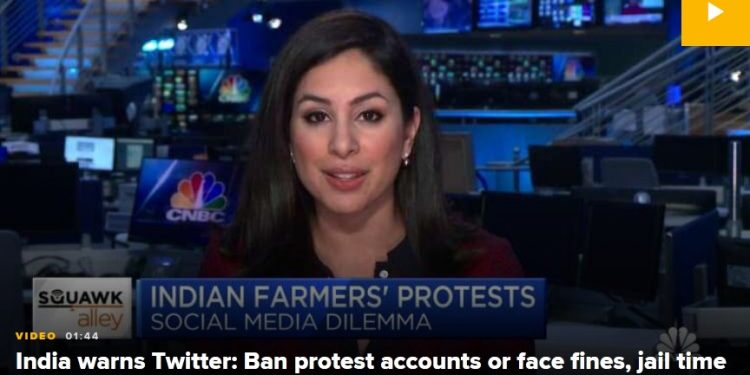 Twitter has banned the accounts of hundreds of users in India at the behest of the Indian government, which ordered that the accounts be brought down for condemning the handling of the farmers’ ongoing protests. In August 2020, Punjab farmers in the country started protesting a bill that would favor buyers only. The protests got out of hand when the farmers bombarded the city in tractors, with one person dead and several injured.

As the government continued to ignore the farmers’ pleas, the situation escalated with the death of many people, including seven people who reportedly took their own lives. Social media users lent their voice to the protests with the hashtag “Farmers’ genocide” on Twitter. Many activists, politicians, media houses, and other social media users have criticized the Narendra Modi led government for its poor handling of the situation.

Last week the Indian government mandated the deactivation of over a thousand accounts, but Twitter only suspended some accounts, stating that such bans will amount to infringement of rights and liberties. The social media platform, however, gave in to pressure from the government on Wednesday, after it received a notice of non-compliance, which people familiar with the matter said could earn Twitter Indian employees up to seven years imprisonment, NY Times reports.

Twitter said it has banned more than 500 accounts and ensured that several other accounts cannot be viewed in India. However, Twitter said it did not remove accounts of media outlets, reporters, politicians, and human rights advocates, adding that leaving their accounts does not contravene any of the country’s laws.

The Indian government has been cracking down on critics in recent times, arresting human rights advocates, and reporters as well as gravely censoring media outlets, and stopping residents of protest areas from accessing the internet. The latter was brought to public notice when Rihanna tweeted about it a few days ago. The country is also banning social media platforms, especially Chinese-owned platforms such as TikTok.

The country, which has the most number of users on Twitter after the United States and Japan, is the fifth country in the world with the most number of deactivation and content removal requests on the platform. The country has also demanded that Twitter release the personal information of certain users.

Authorities in the Asian country are alleging that the critics on social media are supporters of the Khalistan cause, sponsored by the Pakistani government. The movement is one that advocates that Sikhs should secede and form their own country, and the two countries have always had a shaky relationship.

On Wednesday, India’s IT Minister posted a video about a homegrown Twitter alternative, Koo, hinting that Twitter is not the country’s only choice. According to reports, the number of users of Koo is steadily growing.

A local lawyer, Devdutta Mukhopadhyay, has criticized Twitter for bowing to pressure, urging the platform to use the same energy it used to block former US President Donald Trump is helping to ensure that free speech is brought back to India.

Exploring 4 of the Top Trends in Online Learning