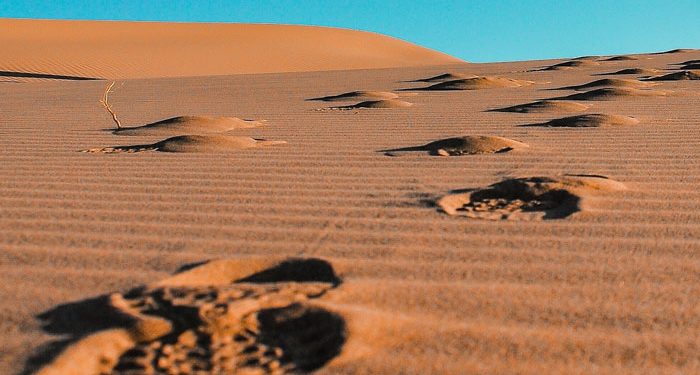 The discovery was made by researchers from Royal Holloway of the University of London (RHUL) and announced via a press release in Smithsonian Magazine.

A co-author of the study, Richard Clark-Wilson, noted that the discovery of human and animal footprints indicates that humans and animals are co-habited and migrated together along with ancient deserts in the Arabian Peninsula before they changed to large grasslands with freshwater lakes in the last interglacial period.

The researchers understood from relevant findings that the interaction of animals and humans would have explained the migration of our ancient ancestors from Africa to other parts of the world across desert regions between 120,000 to 11,500 years ago.

Scientists were able to determine the actual ages of the Nefud Desert footprints using sediment analysis which works by analyzing the last time sunlight shined on sand grains in a given area. In this case, the footprints were made long before they were covered in sediment layers in the ice-age that followed.

“Seven hominin footprints were confidently identified, and given the fossil and archeological evidence for the spread of H. sapiens into the Levant and Arabia during [the era 130,000 to 80,000 years ago] and absence of Homo neanderthalensis from the Levant at that time, we argue that H. sapiens was responsible for the tracks at Alathar,” the researchers wrote. “In addition, the size of the Alathar footprints is more consistent with those of early H. sapiens than H. neanderthalensis.”