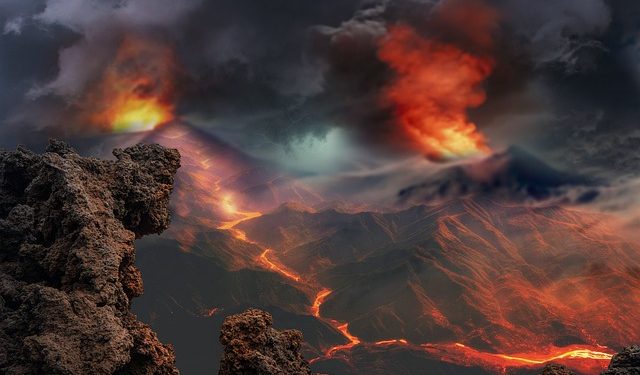 One of Hawaii’s Big Island volcanoes, the Kilauea Volcano, began erupting late Sunday, December 20, according to the US Geological Survey (USGS). The agency reported that a series of earthquakes followed shortly after the volcanic eruption, CBS News reports. The Kilauea volcano is located within the Halema’uma’u crater in the Hawaii Volcanoes National Park. According to officials of the USGS, the volcano was erupting as high as 165 feet into the air around 1 am on Monday.

David Phillips, the spokesperson for the Hawaiian Volcano Observatory informed reporters that the Volcano Observatory was handling the incident. Phillips stated that the agency would give updates about the situation in Kilauea and other volcanoes in the state when such updates become available.

The USGS told reporters that over 500 residents have reported feeling tremors from the earthquake, but it does not expect reports of substantial damages to houses and other structures in the area. The agency later reported that the eruption has subsided leaving a “low-level steam cloud” in its surroundings, CNN writes.

In Honolulu, the National Weather Service has urged residents to be cautious and avoid getting exposed to the fallen ash from the volcano. Excessive exposure to the ash irritates the eyes and organs of the respiratory system, the National Weather Service warned. The Civil Defense Agency for the Country of Hawaii (COH) urged inhabitants to remain at home as a result of the volcano and earthquakes that accompanied it.

“We expect that trade winds will direct the ash towards the Southwest,” COH stated in a tweet. “Residents of Wood Valley’s Kau District, Ocean View, Naalehu and Pahala should prepare for the fallout, as such, we strongly recommend that they stay indoors.”

Kilauea volcano erupted in 2018, causing damage to almost 800 houses. The lava from the 2018 eruption is enough to fill up over 300,000 swimming pools. The lava which continued to flow for months covered an area that is roughly half the size of Manhattan in 80 feet of lava.