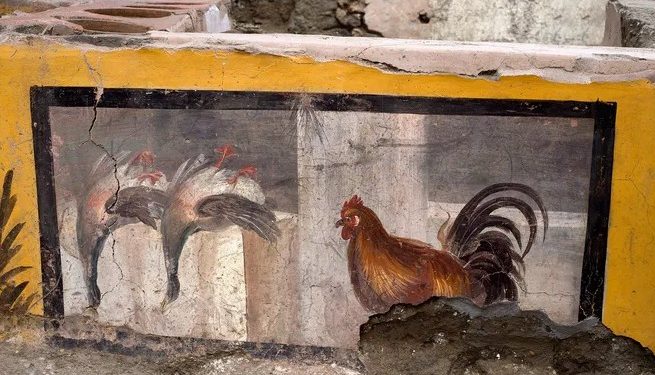 Archeologists have unraveled what could be termed a fast-food eatery at Pompeii, the ancient city of Rome that was overtaken by a volcanic eruption in 79 AD, USA Today reports.

The fast-food joint, which served hot food and drinks to passersby, is known as thermopolium, which means hot drinks shop in Latin. Archeologists made their find in the archeological park’s Regio V site, which is yet to be opened to the public since the coronavirus pandemic forced the park to close shop to millions of tourists that usually throng its venues every year. The finding was displayed this weekend.

There were traces of food found in some jars that went back thousands of years ago. These foods were kept in circular counters dug deep into the ground. The counter had some decorative frescoes drawn on them showing animals that made up the menu of the foods. A chicken and two ducks could be seen beautifully painted.

The director of the Pompeii archeological park, Massimo Ossana, described the find as an extraordinary one. He noted that although some 80 of such fast-foods have been found in Pompeii in the past, it was the first time that archeologists would excavate an entire thermopolium.

Among the exquisite objects found in the site by archeologists were a decorated bronze drinking bowl known as a patera, ceramic pots for cooking soups, wine jars, and amphora. Pompeii, which is today near present-day Naples, was a Roman city that hosted thousands of citizens until it was buried by ash and pumice after the tragic eruption of Mount Vesuvius in 79 AD, CNN writes.

According to Valeria Amoretti, an anthropologist at the archeological park, preliminary analyses showed that the frescoes aesthetically painted on the counter simply depicted the food and drinks that made up the menu of the thermopolium.

Amoretti listed menus such as pork, fish, snails, and beef, as some of the foods that were found in the excavated jars. She said such discovery was only a testament to the extensive variety of cuisine of the people at that time. Nutritionists are still analyzing the food content from the find. Amoretti said scientists now know what the people of Pompeii ate as their everyday meal, even up to the day the city was destroyed.

Human remains were part of the findings of the excavation of this fast-fast shop. Pompeii authorities said that the bones must have been violated by thieves who sought valuables among the ruins in the 17th century. The bones found are said to belong to a man.

Since the ruins were discovered in the 16th century, with official excavations beginning in 1750, more than half of the ancient city, representing 66 hectares, has since been excavated. Pompeii is a UNESCO World Heritage Site and one of Italy’s most popular tourist attractions.