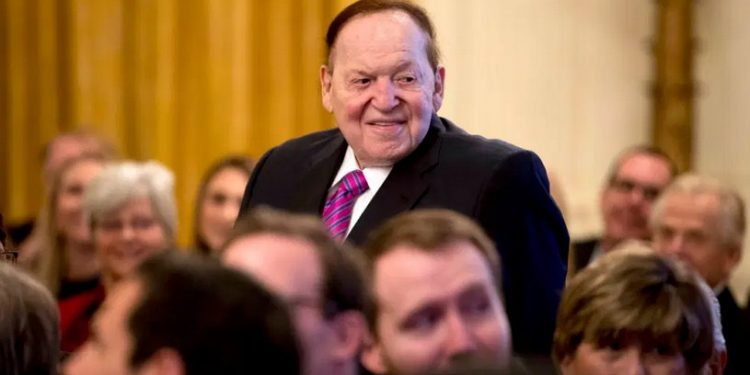 Sheldon Adelson, a business magnate, and GOP supporter died from cancer treatment complications on Monday, according to his company. The CEO and Chairman of Las Vegas Sands, who was one of the main financial backers of the Grand Old Party, died at 87. His assistant revealed his condition as non-Hodgkin’s lymphoma about two years ago. Last week, the CEO left the company on a leave of absence to restart his treatments for the condition.

Born to a striving Boston family, Adelson strived to become one of the wealthiest men in the world with his company, Las Vegas Sands Corp. (LVS). Adelson built the company from scratch, being the first employee of a company that has over 50,000 employees now. The company, which increases its share price on Tuesday, stated that the great work of the tycoon will be appreciated for a long time to come.

Dr. Miriam Adelson, Adelson’s wife was born in Israel, where the tycoon’s funeral will be held, according to reports. A memorial will also be held in Las Vegas, where Adelson’s casinos are located. Adelson was a key player in Washington, a move that was facilitated by his $35 billion fortune. Adelson helped to mold the US strategy towards Israel, formulate some of the policies of the Republican Party, and lobby his way out of dangers that threatened his company, CNN writes.

The billionaire contributed massively to medical research and the challenges of the Jewish community. He was the owner of the country’s largest daily newspaper, gave money to the Holocaust memorial center in Jerusalem, and helped to sponsor young adult Jews who wished to travel to Israel for educational purposes.

Benjamin Netanyahu, the Prime Minister of Israel mourned the death of Adelson on Tuesday. Netanyahu stated that many people around the world will feel the impact of Adelson’s death. The prime minister also talked about the efforts of Adelson in ensuring a smooth relationship between Israel and the United States.

In the United States, Adelson was recognized as a big donor to the cause of Republicans, whose efforts molded the direction of elections in the country. Adelson and Miriam contributed hundreds of millions of dollars to super PACs that align with the party. The couple is the biggest donor of the last United States elections, according to reports from a non-partisan political analyst.

Adelson also backed the presidential bid of President Donald Trump in 2016, describing Trump as a strong leader that the country needs in spite of what the tycoon described as the president’s flaws.