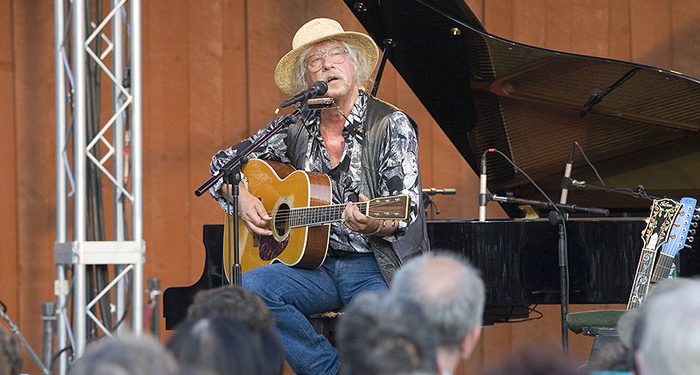 Arlo Guthrie, the 73-year-old son of late folk legend Woody Guthrie has announced plans to retire for health reasons. Arlo Guthrie who followed in his father’s footsteps is popular for his lengthy song, Alice’s Restaurant.’ Guthrie announced that his declining health has made tours and stage shows impossible leaving him no choice but to end his singing career of over 50 years. In a post on his Facebook account, Guthrie describes his experiences through a mini-stroke followed closely by a stroke.

“It’s been a great 50+ years of being a working entertainer, but I reached the difficult decision that touring and stage shows are no longer possible, Guthrie wrote in his post which he titled Gone Fishing”. “I’ve canceled the upcoming shows, and am not accepting offers for new ones. That’s the short version. For the longer version continue reading…”

Guthrie released a longer version of his Alice’s Restaurant in 1967, the song which is almost 20 minutes long became a hit and brought Guthrie to the limelight. Arthur Penn later directed a film from Guthrie’s song. Guthrie also sang a cover of Steve Goodman’s ‘City of New Orleans’ in 1972. His career continued through the 80s, 90s, and 2000s. Through the decades, he played at Carnegie Hall, New York during Thanksgiving weekends, CNN writes.

“A folk singer’s shelf life may be a lot longer than a dancer or an athlete, but at some point, unless you’re incredibly fortunate or just plain whacko (either one or both) it’s time to hang up the ‘Gone Fishing’ sign,” he explained in his post.

He performed “Alice’s Restaurant Massacre” at Carnegie Hall last year after turning down opportunities to perform the song over the years. He had planned to perform the song this year but suffered a stroke on Thanksgiving in 2019 leading to hospitalization and weeks of physical therapy. He recovered early in 2020 and was on a tour when the COVID-19 pandemic hit the United States. Guthrie explained that he has recovered by at least 80% but the months of inactivity have informed his decision to retire.

Guthrie revealed in his Friday post that he is retiring but will not be going completely away from the limelight. He stated that he looks forward to being very vocal in criticizing the bad policies of a new administration after the 2020 United States election.