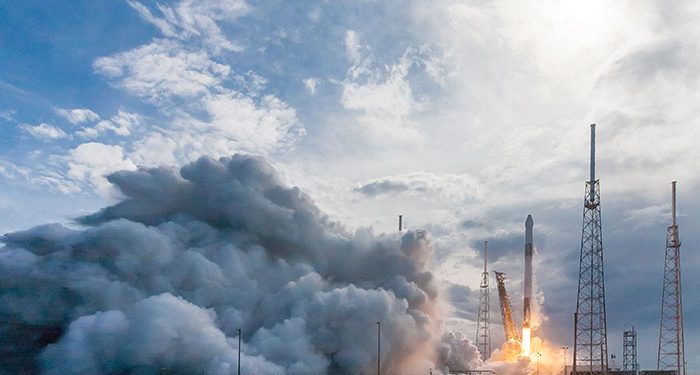 These satellites will help improve GPS navigation as well as boost jamming technology to prevent hacking and other forms of technological interference for the military. A new Falcon 9, a two-stage to orbit launch vehicle designed by SpaceX was used in the launch after it was worked on when it developed faults seconds before a launch on October 2. The rocket booster safely returned to a SpaceX drone ship stationed in the Atlantic Ocean.

SpaceX announced that the satellite was safely delivered and is currently approaching the deployment point where the GPS space vehicle will be released for its last orbital insertion. Before the launch on Thursday, SpaceX’s last launch using the Falcon 9 was made in June when it sent the first satellite for the U.S military. The company has since launched many other missions using used rockets and all those missions were hitch-free.

SpaceX had earlier tried to use the new Falcon 9 rocket on Oct. 2 to send the GPS III-04 into space but the mission was halted just two seconds before the time scheduled for the launch. Hans Koenigsmann, Vice President of Mission Assurance with the company later explained that two of the engines on the rocket lighted up early and made all of the engines on the rocket stop.

The company explained later that the engines had started too soon because of a small amount of lacquer used to safeguard the engine parts of the rocket. The substance should have been removed but it wasn’t and it entered the fuel lines of the rocket. The company explained that all related problems with new Falcon 9 rockets have been rectified indicating that the three missions which SpaceX will fly for the U.S military using new rockets will go as planned.

The two engines of the rockets that malfunctioned were replaced before Thursday’s launch according to the company. The rocket took off at exactly 6:24 pm EST (11:24 pm UTC) from the Space Launch Complex-40 at Cape Canaveral. After the replacement of the rocket’s Merlin engines, the second attempt to deliver the payload went successfully according to SpaceX.

With the success of the launch, SpaceX can now proceed on a planned crewed launch, the second crewed launch initiated by SpaceX. The launch will send four astronauts to the International Space Station (ISS), NASA’s Michael Hopkins, Victor Glover, and Shannon Walker, and Sôichi Noguchi, mission specialist for the Japan Aerospace Exploration Agency. The launch is scheduled to hold on November 14.

If things continue to go as planned, SpaceX will carry out another launch for NASA on November 21. The Sentinel-6 space vehicle will be sent into space from the Vandenberg Air Force Base.

Anne Hathaway, Warner Bros Apologize to Disability Community for Portrayal in “The Witches”