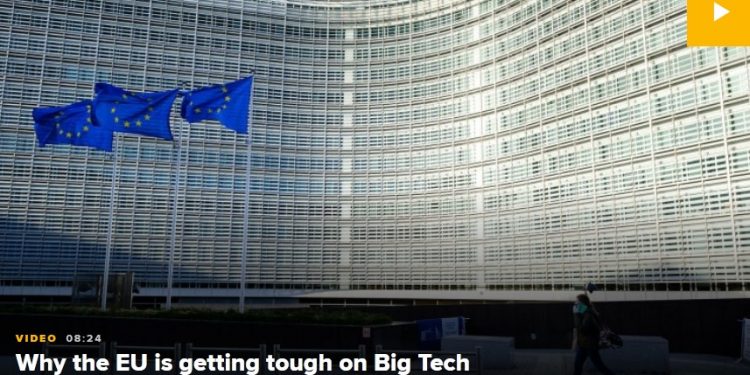 The European Union has introduced stricter laws to curb the excesses of Big Tech. On Tuesday, the European Commission launched legislation that would break the monopolistic hold of tech giants in the European market. Over the years, the commission has complained about how tech giants have controlled the tech scene, stifling the growth of other smaller firms.

The new legislation, called the Digital Markets Acts, seeks to protect the smaller firms and break off the sway that the bigger and powerful companies have over the market. A key feature of the new legislation is ending the practice of self-preferencing. Tech giants use this strategy to ensure that apps and tools developed by them get prioritized in search results over those created by small-time developers. When the new law is put in place, consumers would have a wide range of products to choose from.

The new rule would also force companies like Apple and Google to allow users to uninstall apps preinstalled on their devices. The companies would also share freely with advertisers and publishers the performance metrics.

If these companies fail to comply with the regulations, they could be fined fees of up to 10% of their annual global turnover. A senior official with the EU, who chooses to remain anonymous, told media sources that the EU was tired of continually fining tech companies who broke the rules – and that the latest move seeks to provide a more practical solution to the powerful influence of Big Techs.

Forced divestiture has been suggested as one of the practical solutions that the EU could take, whereby these companies would be forced to sell parts of their businesses if they fall short of the rules extensively, CNBC reports.

Another legislation that was brought forward by the European Commission was the Digital Services Act. This law forces social media platforms to take down content that is deemed harmful to the public. Failure to do so would result in fines for these companies.

Margrethe Vestager, European Commissioner for Competition, explained that the proposed legislation seeks to achieve a number of purposes. Firstly, users across Europe would be able to choose between a wide range of products and services online. Secondly, the smaller tech companies would be offered a level-playing field to compete with the big dogs in the tech scene.

While the proposed laws would have to be accepted by governments and lawmakers across Europe to see the light of the day, policy experts expect the process to be a walk in the park for officials at the EU. Vestager also expressed optimism that the new laws would be passed rapidly within the window of two years.

Over the years, the EU has been pushing for reforms in the tech industry, initiating laws that would protect user data and keep the digital space safe. However, these current proposed laws strike at the heart of the business modalities of the powerful tech companies.

Other countries have taken a cue from the EU. A few days ago, the US Federal Trade Commission launched a lawsuit against Facebook, challenging its business models, especially the takeover of competitors.

Social media companies have reacted to the new laws proposed by the EU. TikTok said it was a step in the right direction that social media platforms are transparent and held to account. Twitter explained that it was committed to making its online community safe and promoting an open internet. The micro-blogging platform said it welcomed the new laws proposed by the European Commission.