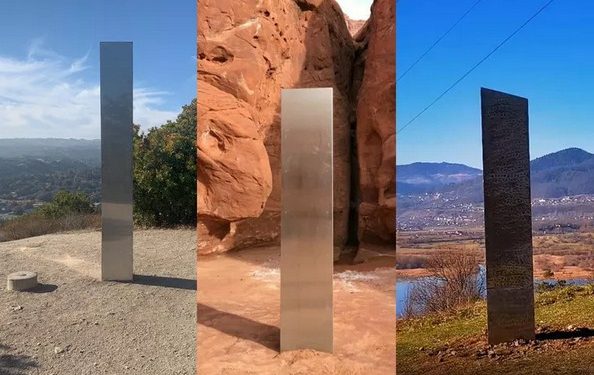 While the entire world is gripped in stupefaction at the mysterious appearance and disappearance of monoliths in several spots in the US and Romania, a group of artists has emerged to claim responsibility for the curious monoliths which people contend may have been erected and removed by aliens. The group known as The Most Famous Artist stated on Instagram that they are behind the mysterious work of art installed and removed in the deserts.

The first one in the Utah desert was found by wildlife officials while counting sheep from inside a helicopter. But following its disappearance and the uproar that attended it, four men eventually claimed that they dismantled it, Vox reports.

The Most Famous Artist group which said they did the Utah monolith said they could do more for anyone that desired it for $45,000 – including erection at some remote spot. The group said the monolith artwork they can produce for a service fee will have “Authentic dimensions and museum-quality materials; edition of 3+1 artist proof; delivery and installation included; Blockchain certification of authenticity, signed and dated ‘The Most Famous Artists 2020’” and that delivery will be in 4-6 weeks.

After the group posted the photos of the monoliths on Instagram and supplied news stories about the arts from Mashable, Fox News, and Artnet, they went ahead to reveal that they put up another monolith at Joshua Tree National Park. They even provided a photograph of a masked man producing one of the monoliths and joked that people were in error when they claimed that the artworks were made by aliens.

Matty Mo, who appeared to be the leader of the group, said they were not responsible for the monolith discovered in Romania, but said they were responsible for the others. When his followers pushed him to provide more proof that he or his group is actually behind the monoliths, he said he could not do that because of the legality surrounding the erection of foreign objects on the deserts and other government lands.

“I am not able to say much because of legalities of the original installation,” Mo stated on Twitter. “I can say we are well known for stunts of this nature and at this time we are offering authentic art objects through monoliths-as-a-service. I cannot issue additional images at this time, but I can promise more on this in the coming days and weeks.”