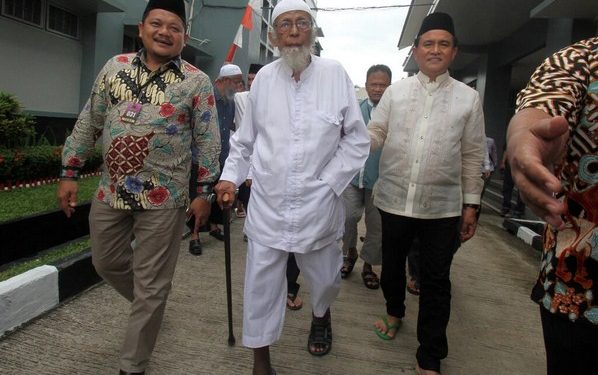 Despite concerns that he might still have a very strong influence on extremist groups in the region, authorities in Indonesia released Abu Bakar Ba-asyir, a firebrand Islamic cleric that was jailed in connection to the Bali bombings of October 2002. The 82-year-old cleric was sentenced to 15 years in prison in 2011, for backing the training of militants who perpetrated the Bali bombing which claimed the lives of 202 people.

Authorities stated that Ba’asyir was released five years early as a result of sentence reductions based on good behavior. The cleric who was released on Friday is the co-founder and former leader of Jemaah Islamiah (JI), a radical Islamic terrorist group with ties to al-Qaeda. JI, which wishes to create an Islamic State in Southeast Asia, claimed responsibility for the Bali bombings.

The October 12 bombing in the popular Indonesian island took the lives of 202 people from 21 different countries. Eighty-eight of the casualties were Australians, including six members of an Australian football team who had gone to the Sari Club as tourists to celebrate a premiership win. Ba’asyir’s release has caused positive and negative reactions in Australia and Indonesia.

Australian PM Scott Morrison stated that the release will reopen the wounds of families of victims who were still trying to move past the incident. The prime minister said that the country would respect Indonesian rules and continue to remember its citizens that had died in Indonesia’s largest terrorist attack, the BBC reports.

The cleric, who has frequently denied being involved with any terror organization, had previously been imprisoned for 30 months in 2005 for conspiring with and funding the bombers, but an appeal court overturned his sentence. At the time of the bombing in 2002, Ba’asyir was the head of JI, but it was still uncertain if he had planned the attack or given the masterminds a helping hand.

Ba’asyir later removed himself from JI and formed a new group Jamaah Anshorut Tauhid (JAT), which the United Nations has also designated as a terrorist organization

Sidney Jones, director of a conflict analysis institute in Indonesia, said the decision to bomb the clubs was made by another leader of JI but Ba’asyir would have consented to the atrocious act. Jones said that Ba’asyir could have stopped the attack with a simple “no”, and the lives of hundreds would have been spared. Jones told reporters that the 82-year-old cleric does not exert as much influence as he used to in the region.

“It’s my opinion that conservative Islamic groups would view him as a respectable statesman, but I doubt that would bring about a fresh wave of extremist attacks,” she explained.

Jones added that the reason for her assertion is that not only has the cleric lost the command he used to have in the region, the Internet has also changed the way radical groups receive their instructions. She added that most extremist groups no longer take orders from a single, all-knowing leader but prefer smaller, decentralized groups. After the Bali bombing, many of the planners of the attack were killed in gunfire exchange with security troops, executed by the state, or jailed for life.

Eddy Hartono, leader of the anti-terror agency in Indonesia said that Ba-asyir would be put through a radicalization program which might help change the tone of his future lectures.