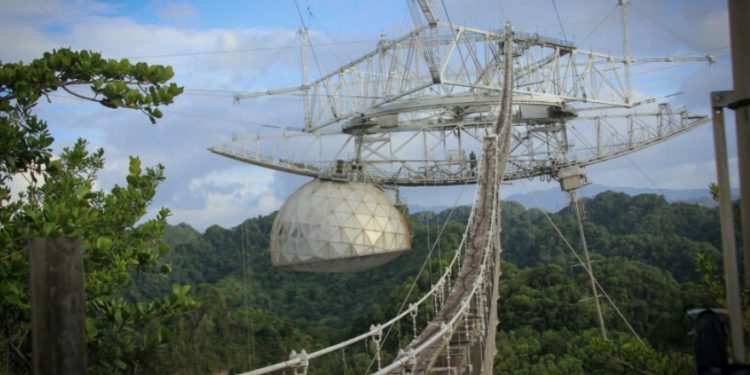 The National Science Foundation (NSF) on Thursday released a video that showed the moment the Arecibo Observatory in Puerto Rico collapsed. The video, which was captured several days back, showed how the cables upon which the almost 1000-ton structure hanged on snapped, causing the gigantic system to fall to the observatory’s dish located below.

The footage was captured by a camera operator at the Operations Control Center. There was also a drone camera located at the top of the platform that showed events happening in real-time. Aware of what was happening at that point in time, the drone operator controlled the drone camera to show the moment of collapse.

The National Science Foundation, the agency in charge of Arecibo, heeded to engineers’ warning back in November that the structure could collapse at any moment and started monitoring the observatory at hourly intervals.

Ashley Zauderer, a program manager with the NSF, during a press briefing, said the observatory was fortunate that the drone operator noticed quite early what was happening and switched on the camera to capture the moment.

The video had shown when several cables connected to the platform snapped, allowing the platform to break off and collapse on the dish. Multiple cables had been attached to three support towers to help suspend the platform in the air. These were also brought down as the cables snapped.

However, the present collapse of Arecibo is no shock to engineers and other observers who had predicted its imminent crumbling. After two support cables failed months back, engineers had concluded that it was only a matter of time before the platform caved in and collapsed on the dish. The NSF had hoped to begin careful and controlled leveling of the platform before its imminent collapse, but it was not to be as the structure yielded before any measures could be carried out.

However, moving forward, the NSF will try to determine how to clean up the mess occasioned by the fall of Arecibo. There is the need to carry out an environmental evaluation of the entire area and ascertain if it is safe enough for work to begin, considering how fragile other support structures in the area might be.

Building a replacement for Arecibo would be a multi-agency process that would require inputs from lawmakers. Ralph Gaume, a director with the NSF, said the replacing Arecibo would take quite a while considering the required appropriations from Congress and the requisite evaluations by scientific experts. Gaume admitted that it would take quite some time before a replacement would be in the works.