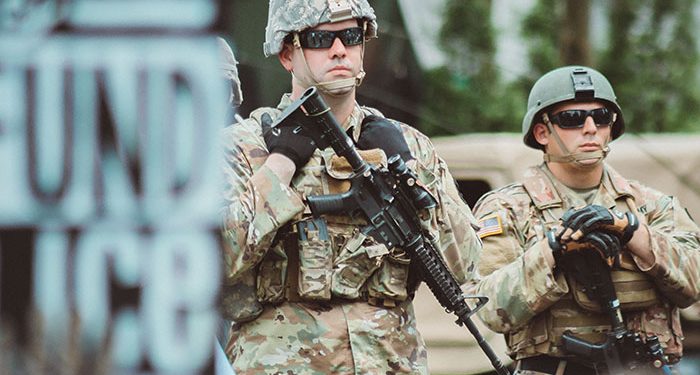 “At the request of the Joint Incident Command protecting free speech and keeping the peace in Portland, I activated the Oregon National Guard last night,” Brown said. “These are Oregonians like you and me, who have volunteered their time and taken leave from their jobs and families to keep the streets of Portland safe.”

She criticized the protesters who destroyed downtown businesses, cautioning them to put an end to their acts of violence. Brown had declared the gathering a riot, and dozens of state troopers could be seen ordering people to leave, Fox News reports.

The police reported that they had arrested about 12 protesters carrying different firearms, including a protester who threw a Molotov cocktail at the police. While violence erupted downtown, other protesters engaged in peaceful demonstrations for racial justice a few meters away. It attracted a few hundred people.

Multnomah County District Attorney Mike Schmidt decried the level of damage done by the protesters and promised that his office would prosecute people who had been seen to engage in the wanton destruction of properties. He said the level of damages to local businesses was unacceptable.

The Northwest Portland gathering numbered about 200 people and commenced at 5:20 pm. They carried different placards that called for the exit of President Donald Trump. At a point, some people in the crowd broke the windows of a church, a hotel, and other buildings.

Trump has regularly criticized the Portland demonstrations, which has happened every other night since the death of George Floyd in the hands of Minneapolis police officers. At some point, Trump sent in federal officers who responded with force to the protesters, teargassing them.

Other demonstrators also gathered in Southeast Portland, this time calling for the resignation of Portland Mayor Ted Wheeler, $50 million in cuts to Portland police, and other demands.

Mayor Wheeler has been critical of the manner the federal government has reacted to protesters. This has not appeased protesters who faulted Wheeler for failing to take strict actions to reform the city’s police. Notwithstanding, the mayor won a second term in office on Tuesday.

It is expected that the City Council will vote on Thursday on $18million in proposed cuts. However, it is yet to be seen if the votes will be enough to ensure approval for reductions.