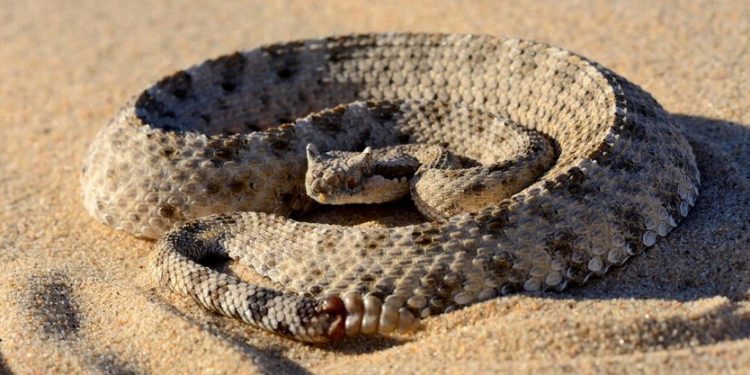 Sidewinding snakes are so named as a result of the incredible way they move. Snakes in this category mostly live in deserts and instead of slithering with their heads facing forward and other body parts following, these snakes move sideways in an S-shape. Their heads move to the side and other body parts curl in the same direction. Jennifer Rieser of Emory University, Atlanta, and other physicists have explained the peculiar reasons behind the snake’s unusual movement.

“It’s like try to move around on a very sandy beach, the earth keeps giving way and that can be very frustrating,” Rieser said. “These snakes live in similar sandy environments and it is almost impossible for them to move like other snakes.”

Rieser and a team of other scientists studied the phenomenon behind the snakes’ movements and revealed their findings on Monday. The study has been published in Proceedings of the National Academy of Sciences. The group revealed that with the aid of advanced microscopes, they were able to examine the skin of the peculiar creatures and they discovered that the snakes have minute stomach pits instead of the spikes that are available in other snakes.

Rieser explained that the peculiar snakes have adapted sidewinding to ease their movements and subsequently, their survival in the terrains. Sidewinding snakes are not that common, but their unusual movements do not limit their abilities. One of the four sidewinding species of vipers, the sidewinding rattlesnake is currently considered the snake with the highest speed in the world, traveling as fast as 18 mph when the need arises.

The team explained that snakes can move around, being without limbs, as a result of the microstructure of some parts of the bodies, especially their bellies. It added that it arrived at this conclusion after examining the skin shed by a sidewinder using an advanced and powerful microscope.

Rieser said the spikes in the bellies of snakes, though unseen to the naked eyes, allow them to slither face forward on the ground. Sidewinders have gone a step ahead, the scientists said, trading their spikes for tiny holes that allow them to move sideways in sandy terrains. The scientists also revealed that the North American sidewinders combine the two having a lot of pits and a few spikes scattered over their bellies.

Rieser explained the reason for this, stating the sidewinding rattlesnake can be found in North American deserts which are only about two decades old compared to deserts in North Africa which have been around for millions of years.

“The sidewinders found in America have not been around for long, so it is possible that their evolution from spikes to pits is not complete, unlike those that are available in Africa,” Rieser added.