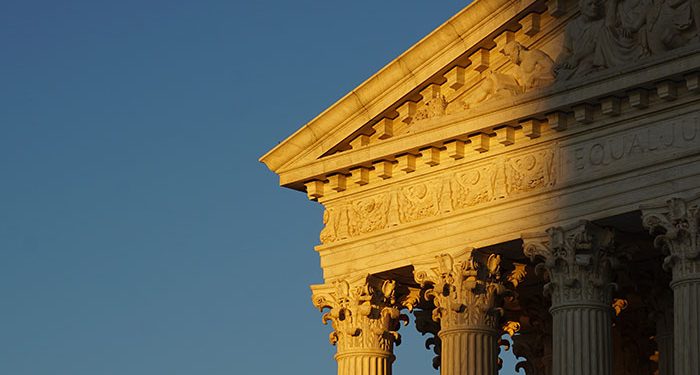 The Supreme Court has ruled against a federal appeals court’s decision that DeRay Mckesson, organizer of the Black Lives Matter protest, should be sued for injury inflicted on a police officer by an unidentified attacker.

The police officer, John Doe, was attacked by an unknown person who hit him on his face with a rock in a 2016 protest against the killing of a black American, Alton Sterling, by a white cop in Baton Rouge, Louisiana. The shooting led to serious nationwide protests.

John Doe suffered severe injuries as a result of the attack. His jaw, teeth, and brain were affected. For this reason, he sued the organizer of the protest, DeRay Mckesson, on the premise that he ought to have been aware that violence will be the end result of the protest. Doe also took legal actions against Black Lives Matter, but it was overruled on the premise that the entity was a social movement, and for that reason, it cannot be sued.

The Supreme Court opined that, based on the freedom of speech, the Appeals Court ought not to have ruled against Mckesson without having a proper understanding of laws obtainable in Louisiana. It, therefore, sent the case back so it could be reviewed further.

“The Fifth Circuit should not have ventured into so uncertain an area of tort law – one laden with value judgments and fraught with implications for First Amendment rights – without first seeking guidance on potentially controlling Louisiana law from the Louisiana Supreme Court,” the Supreme Court ruled.

Arguing against the reversal of the decision by the appeals court, lawyers representing the wounded police officer said the Supreme Court’s ruling “would encourage negligent, unpeaceful, and illegal behavior at the expense of others and, in particular, would expose law enforcement officers to serious harm.”

In his opinion, the legal director of ACLU, David Cole, said that consenting to the appeal court’s decision would have tremendously weakened the First Amendment right to protest.

One of the major precedents for the Supreme Court was a protest by black leaders in 1982. The court had ruled that the National Association for the Advancement of Colored People (NAACP) was uncountable for damages suffered by white merchants due to boycotts by the blacks, stating that the association played a peaceful role.

DeRay Mckesson has been renowned for upholding the course of the Black Lives Matter movement. He first became active in the protests against the killing of a black teenage boy Michael Brown, who was shot by a white cop in August 2014 in Ferguson, Missouri.

Another Restaurant Chain, Friendly's, Files for Bankruptcy Due to the Pandemic