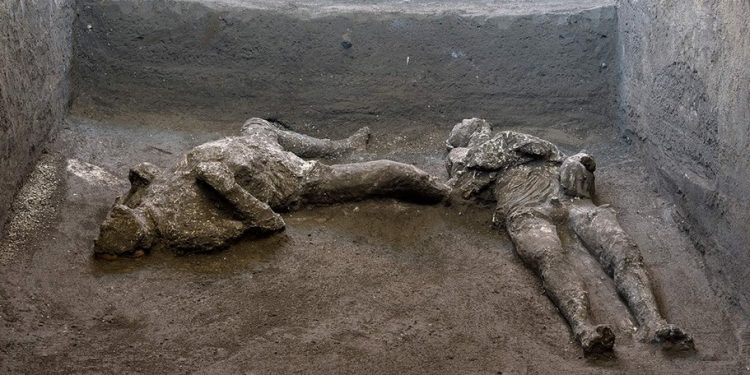 The almost perfectly-preserved remains of two men, believed to be a master and his slave, have been unearthed in the ancient Roman city of Pompeii. They were thought to have died while trying to flee the devastating eruption of Mount Vesuvius in AD 79. According to Pompeii archeological park officials, the remains were found during excavations at a villa just outside the city.

Massimo Osanna, the park’s director, said the find was truly exceptional. The culture minister Dario Franceschini said the discovery confirmed Pompeii’s status as a place for study and research.

The two men lying together were believed to have initially escaped the first phase of the eruption that covered the entire city in volcanic ash and pumice. However, they didn’t survive the resulting blast that happened the next day. This is because the blast came from different directions, surrounded the victims, and buried them in ash.

Their remains were discovered in the same place where a stable containing three harnessed horses were excavated in 2017. When experts analyzed, they noted that the younger man was a laborer or a slave due to several compressed vertebrae in his skeleton. He is touted to have been aged between 18 and 25. He was also thought to have been putting on a pleated tunic made of wool.

The wealthy older man was probably aged between 30 and 40. He had a more robust skeleton around his chest area and was also putting on a tunic. They were found lying in what could have been the underground corridor of a villa. The corridor was known as cryptoporticus in Roman times. Archeologists believe the victims thought the underground passageway offered protection from the raging blast, NY Post reports.

Park officials said there would be further excavations in the coming months to reveal where the pair were headed and their roles or occupation in the finely designed villa that offered a breathtaking view of the Mediterranean Sea.

Casts have been created for the remains. Archeologists poured liquid chalk into the void left by the bodies in the ash to form a cast. This technique has its origin from the 1800s, and it gives archeologists the ability to see what position the victims adopted at death.

The find is the latest in a series of gripping discoveries provided by excavations at Pompeii over the years. In 2018, a man’s remains believed to have survived the first part of the eruption was found. He was found under a large stone block. He died from lethal gases from the blast rather than from the impact of the falling building around him. On his remains were found a small sack containing 20 silver and two bronze coins. In today’s money, that would be about $595.

The latest excavation is part of a $1.1 million project that has not been halted by the coronavirus pandemic. The park is currently closed to tourists. However, pre-COVID, the park attracted over four million people annually.

The ruins of Pompeii were discovered in the 16th century. The first excavations started in 1748. Over 1,500 of the nearly 2,000 victims of the volcanic eruption have been found since then.