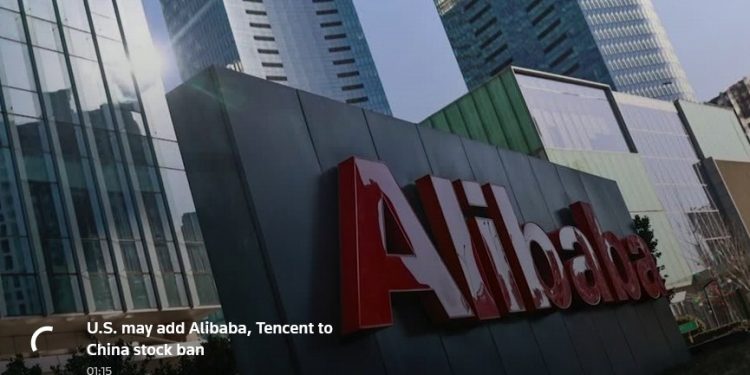 Washington is set to expand its list of blacklisted Chinese companies, sources said on Wednesday, after revealing that the present administration is considering adding two of China’s most valuable companies, Alibaba and Tencent to the list. The Trump administration has stated that firms that are on the list, which was released in an executive order in November, have some sort of connection to the Chinese military, and such connection can threaten national security.

Together, Alibaba and Tencent are valued at $1.3 trillion, and adding them to the investment blacklist would be President Donald Trump’s most drastic step yet, as he continues to target the Chinese government in his final days in office. The sources, who have chosen to be anonymous, added that officials of the US Department of Defense are evaluating the move alongside plans to add even more Chinese companies to the investment blacklist.

After the reports started making rounds on Wednesday, the companies’ shares took a small hit in the Hong Kong Stock Exchange. Alibaba, one of the world’s largest e-retailers, and Tencent, the parent company of China’s social media platform, WeChat, both suffered a share price decline of about 4% each.

Investors and experts are doubtful that the ban would be imposed on the two giant Chinese companies. Some investors stated that even if the ban is imposed on Alibaba and Tencent, it would be lifted after a short while as a result of the companies’ worth and the effect such ban would have on the reputation and finances of the United States Stock Exchange.

“It is an unpleasant policy, considering the huge amount of money available in the Asian economy, which is increasing by the minutes that we should kick these companies out of America” Thomas Caldwell, who heads Toronto’s Caldwell Investment Management, said in reaction to the impending bans. “The stock exchange markets should be unbiased and neutral.”

China has also reacted to the bans, stating that it will take appropriate steps to protect the companies’ interests. Trump’s executive order of November will take effect from January 11, restricting US investors from buying or selling the shares of blacklisted Chinese companies. On Tuesday, the administration ordered a restriction on eight of China’s software apps, giving the US Department of Commerce 45 days to stop transactions on the apps which include Ant Group’s Alipay and Tencent’s WeChat Pay, and QQ Wallet, Reuters reports.

The law requesting the Department of Defense to draft a list of Chinese companies that can be influenced by the Chinese companies was passed in 1999, but it had been largely ignored until late last year. The original list released in November contained 31 Chinese companies, but the Pentagon has added four more companies, and more are being considered, according to reports.

All the ambiguity surrounding the executive order seems to be confusing to the New York Stock Exchange as it did its second U-turn in just a week. Seven days ago, the NYSE announced it was going to delist three Chinese telecom companies, China Mobile, China Telecom, and China Unicom. On Monday, it said it had decided, after consulting regulators, to reverse its first decision. On Wednesday, it announced it has decided to delist the companies after all.