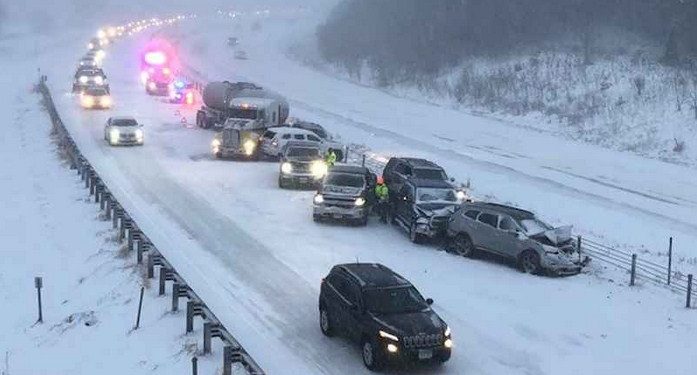 On Wednesday, a Christmas blizzard disrupted travel plans for lots of Minnesotans, causing delayed flights, and closure of most of the highways across the state, and leaving drivers stranded.

According to meteorological reports, a blizzard warning was forecast for central and southern Minnesota, with weather experts predicting wind gusts of 70 mph-plus, which was expected to deteriorate further. Snow of seven to 11 inches was predicted in central Minnesota. Meanwhile, this was a region where experts had expected weather conditions to return to normal.

Places like Minneapolis and St. Paul witnessed snow emergencies. At least, 300 flights were canceled at the Minneapolis-St. Paul Worldwide Airport, while others had their flights postponed. The City’s Metro Transit also witnessed numerous bus delays.

The result of the blizzard was poor visibility and slippery roads that made driving very uncomfortable for most drivers. It also led to the traffic jam, making vehicular movement almost impossible at Interstate 94 close to Albertville and Monticello. Across the state, there were plenty of reports of car crashes. The same traffic jam shut down interstate 90 which lies between the South Dakota border and the east of Blue Earth, StarTribune reports.

There were reports of accidents within Duluth, where a large swarm of vehicles on I-535 made officers issue a travel advisory, asking the public to stay at home. In rural areas of the state, the State Patrol team reported that many counties were employing their snowplows to clear the snow off the road due to the low visibility which was set at almost zero.

The Nationwide Guard was the host of stranded motorists in west-central Minnesota, where it opened its doors to shelter these drivers. Another Nationwide Guard armory was opened in Fairmont, southern Minnesota. Highway 12 was a no-go area, as traffic stretched all the way from Benson to Murdock, with little or no movement.

The wind gusts have been attributed to the spates of blackouts witnessed in southern Minnesota. According to the Nationwide Climate Service, this is not the first time that Minnesota would be witnessing a weather condition of this type. Back on October 20, the area saw a snowstorm of up to 7.9 inches. However, Wednesday’s weather condition appears to be the worst so far this year.

Notwithstanding the poor weather condition, folks were still seen trying to shop in different areas within the state. At the Wedge Group Co-op in Minneapolis, customers had already cleared the counters between 10 am and noon, according to Josh Mead, an employee of the grocery store.

The Hudson Hardware store in Richfield saw an influx of customers coming in to buy shovels and Softener Salt. There was also increased purchase of liquors at GP Liquor in Inver Grove Heights – a needed companion for the cold season.

The weather concerns were enough to prompt the shutting down of the community COVID-19 testing centers by the Minnesota Department of Health, a move that came earlier than expected. The state’s shipment of the coronavirus vaccine is also expected to be delayed due to logistical problems and the blizzard conditions.