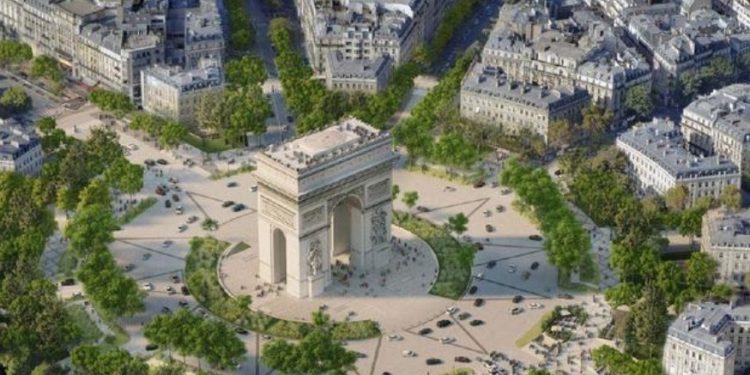 Mayor Anne Hidalgo has set motion plans to transform one of Paris’s iconic venues – the Champs-Élysées into a green, pedestrian-friendly place, with fewer cars, and more rooms for tourists on sight-seeing. Hidalgo recently approved an ambitious renovation project that will help achieve this plan.

The venue is probably among one of the most famous shopping areas in the world. It has up to eight lanes of traffic and courses through the Arc de Triomphe and the Place de la Concorde. In a new plan drawn up by Architect Phillipe Chiambaretta and his company, PCA-STREAM, vehicular traffic is set to be reduced to a considerable extent in the area, and passers-by will now be able to enjoy the improved greenery that is set to spring up.

The need for a transformation was evident even before the coronavirus pandemic following the reduced number of visitors that once thronged the eye-catching area. The place had begun to lose its appeal and the fact that it was becoming an area of choice for anti-government demonstrators who troupe to the venue in their numbers.

In June last year, French police staged a protest at the venue, protesting against restrictions on restraint holds they can use and other such measures placed by the government in response to public outrage on cases of police brutality in France.

There was wild jubilation among the Champs-Élysées Committee when Mayor Hidalgo announced the news during an interview with a French weekly newspaper, Le Journal du Dimanche. This local association had taken it upon themselves to promote and develop the area, CNN reports.

The committee, in a statement, said that in the last thirty years, the area had lost that upscale luster and ambiance that attracted tourists from all over the world. The committee noted that over the years, residents in the city and others from all over the world had kept their distance from the place, citing a number of disturbances as contributing to this turn of events, including the gilet jaunes, strikes, health, and economic crisis. Three years ago, the committee had put together a proposal on strategies to revamp the area.

According to statistics rolled out by PCA-STREAM, more than half of pedestrians that swarm the area are tourists, with Parisians making only a tiny 5% of the total traffic to the area. The Champs-Élysées Committee said it celebrated the decision, which is termed an audacious move by the city’s town hall leaders to return the area to its former glory.

Hidalgo said the first phase of the project would be geared towards giving the Place de la Concorde a facelift before the 2024 Summer Olympic, which would be hosted by Paris. She noted that after the games, other venues would be completed.

Further plans for the renovation project are set to be announced next week, as Parisian authorities map out a revitalization program for the city ahead of the 2024 Olympics.