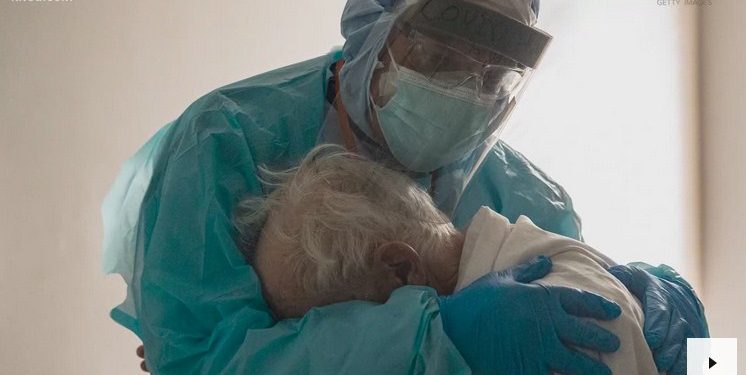 The photo of Dr. Joseph Varon, the chief of staff at United Memorial Medical Center, has gone viral for hugging one of his COVID-19 patients to soothe him. Varon, who has worked for 256 straight days at the hospital caring for coronavirus patients because of their continual influx, said he was moved to hug the old man because he was distraught with his condition and just wanted to go home.

He said he entered into the COVID-19 treatment unit where the man was only to see him crying and trying to exit the unit. He approached the infected man and asked him what was amiss, and the man said he wanted to go home to be with his wife because he was lonely and felt trapped. Varon said his heart reached out to the man, and he held him close to calm him down, MSN reports.

“So, I just grab him,” Varon said. “I hold him. I did not know that I was being photographed at the time. And he was just crying and eventually he felt better, and he stopped crying.”

The Houston doctor said he feels for many coronavirus patients in the hospital because they often feel depressed and feel as if they are in jail. He said he and his nurses devote as much time as possible to treating patients and reassuring them that they will recover and that everything will be okay with them.

“A gentle touch, just telling them they’re going to be ok kind of encourages them,” Dr. Varone revealed. “Because, in those units, trust me they get depressed. It’s like being in jail. Trust me, that’s what it looks like.”

Varon said he usually allows photographers to come into the hospital any time so that they can see everything for themselves and report what they see and experience with the wider world. He said the ultimate aim is to get people to believe that COVID-19 is real and to show transparency in what is happening at the hospital.

However, he said he did not know when Go Nakamura, the photographer, took his photo shots which have not gone viral. Varon said the old man is much recovered and getting better. He said he will be discharged from the hospital to rejoin his family when his swab tests are negative.

According to the Johns Hopkins University, more than 13 million people are now infected with coronavirus in the United States, and over 256,000 have died from the pandemic. Varon said the situation may turn worse if the government does not take urgent steps to arrest the situation, including the distribution and application of vaccines.