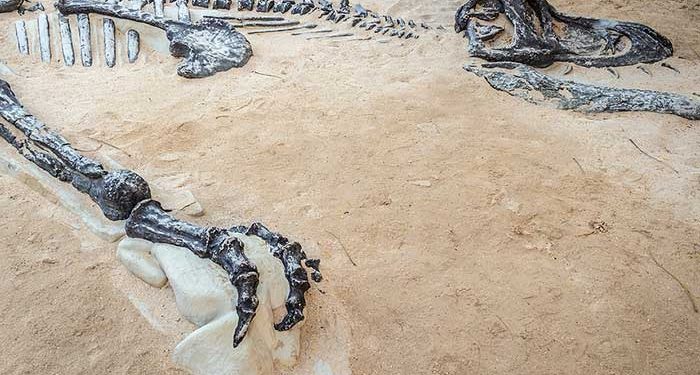 The well-preserved frozen remains of a cave bear that lived 39,500 years ago have been discovered by reindeer herders in Russia. The Ice Age cave bear was found in melting permafrost on the Lyakhovsky Islands located at the New Siberian Islands archipelago between the Laptev Sea and the East Siberian Sea.

After the reindeer herders discovered the ancient creature remains with all its internal organs complete and fresh, they contacted the North-Eastern Federal University (NEFU) in Yakutsk, Siberia, and transferred all rights to the discovery to the scientists there.  Scientists at the university are at the forefront of research into extinct rhinos and mammoths among other Ice Age animals.

Researcher Lena Grigorieva who confirmed that the extinct animal was found with its head and soft tissues intact, stated that the ancient cave bear existed 22,000 to 39,500 years ago. She said that the find constitutes a wonderful research value to the entire world. Before this time, scientists had only been able to unearth the incomplete remains of cave bears that went extinct 15,000 years ago.

“This is the first and only find of its kind — a whole bear carcass with soft tissues,” Lena Grigorieva said. “It is completely preserved, with all internal organs in place. This find is of great importance for the whole world.”

According to Maxim Cheprasov of the Mammoth Museum lab in Yakutsk, conducting a radiocarbon analysis of the carcass will enable scientists to comprehend the exact age of the remains. Since permafrost has been melting in much of Russia’s Siberia region, scientists have found Ice Age cave lion cubs, wooly rhinos, mammoths, and other extinct creatures in the last decade.

The cave bear is said to live in Eurasia in the Middle to Late Pleistocene period tens of thousand years ago; but scientists are yet to see the location where the current cave bear was found – a distance of over 5,000 miles from Moscow, Russia’s capital.