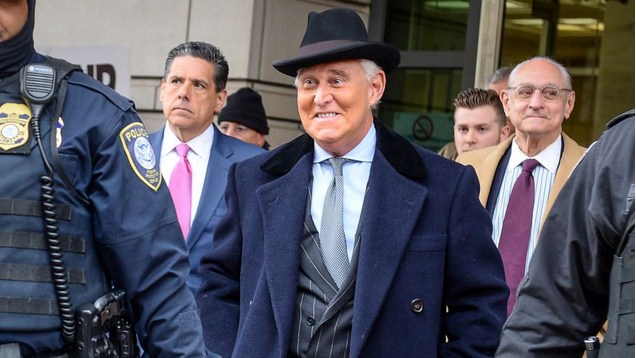 Roger Stones confirmed that he met with President Donald Trump on Sunday evening to thank him in person for granting him a presidential pardon less than a week after the president released the former campaign adviser. Speaking to newsmen on Monday, Stones said that he indeed met with the president over the weekend at the Trump International Golf Club in West Palm Beach.

Stones noted that alongside his wife, they met with the president to thank him for finally absolving him in the pursuit to right the wrongs of his unjust conviction and sentencing which was done in a Gestapo manner. Stones berated the actions of the judge who withheld evidence that would have been crucial to his acquittal, and also the role played by a female jury and the entire prosecuting team.

Stone said he and his wife had been invited to the club’s dinner buffet by Christopher Ruddy, publisher of Newsmax. He explained that it was in this dinner meeting that he came across Trump, who was also there with his family.

Trump was accompanied to the club’s dinner event by his son Donald Trump Jr., Eric Trump and his wife Lara Trump, and Kimberley Guilfoil. The president is a regular patron at his club, which he visits every Sunday, especially when he is around at Mar-A-Lago.

A source at the meeting provided the press with pictures of Stones standing arm in arm with Trump. Asides from being a one-time campaign adviser to Trump, Stones is also a long-time friend of Trump.

Stones was convicted on seven-count charges of obstruction of justice, witness tampering, and perjury in Congress among others during Robert Mueller’s investigation into the Russian connection in the 2016 presidential election.

Stones said he used the opportunity to discuss with Trump how the president can reclaim his stolen mandate in the US 2020 presidential election. He noted that he explained to the president how appointing a special counsel will ensure that those that tried rigging the election are brought to book.

Trump had earlier offered clemency to Stone, commuting his 40-month prison sentence. He was scheduled to commence his jail term in July when the president announced his pardon. Stones afterward called Trump the greatest president in US history since Abraham Lincoln.

Stones were among 19 other individuals granted a pardon by the president, including Charles Kushner, father of the president’s son-in-law and top adviser, Jared Kushner.

Now, Stones is threatening to sue the Department of Justice, FBI’s former director James Comey, and other high-profile individuals that played a role in his conviction and subsequent sentencing. He revealed that a $25 million lawsuit is in the works.