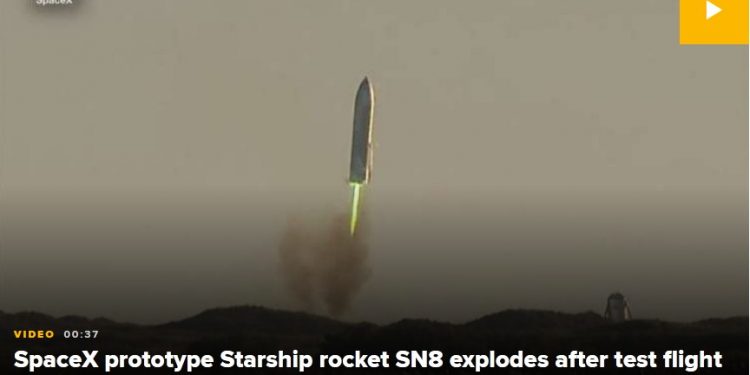 A Starship prototype built by Elon Musk’s SpaceX caught fire during landing, in a mission that was described as a success by the space exploration tech company. The mission was carried out on Wednesday, in the Chica Boca facility of SpaceX. The prototype was initially scheduled to fly 60,000 feet above the Earth’s surface but SpaceX later announced that the mission will stop at 40,000 feet. Everything went on as planned until the SN8 exploded as it crashed back into the ground.

There was no one aboard the prototype space vehicle, as it was just a developmental version of Starship, Musk’s proposed 160-foot spaceship that the CEO projects will be used to place gigantic satellites in space, take people to different cities at very high speeds, and later help humans settle in Mars. The test is the highest flight conducted by SpaceX in its pursuit to establish a human settlement on Mars. As such, it was expected to encounter certain problems.

In fact, before the test flight, Musk tweeted a prediction of a one-three success rate for the safe landing of the prototype space vehicle. The SN8 surpassed Musk’s expectations and was able to reach its landing target, even after the explosion. Musk later explained in another tweet that the explosion which had engulfed the rocket in blazes had been caused by a problem in the fuel system of the rocket, CNN reports.

SpaceX, which has always been quick to move on from errors, will make adjustments in future tests and ensure the situation is not repeated, just like it did when previous prototypes of Starship got damaged during tests. The space tech company did not state exactly how the flight would look like but shortly after the rocket was launched, one of the rocket’s three engines went off. It was however able to maneuver perfectly with the other two engines.

The prototype was also able to execute the angling descent that Musk had talked about during a presentation in 2019. Musk had explained that when a rocket tilts to a specified angle during descent, its speed would reduce, and just before it finally lands, it would right itself and land safely on its pad.

This is the third trial of the week. The other two test flights were stopped just before launch though SpaceX did not give any reasons for cutting the flights short. It is possible that the system caught signs of abnormalities in the rockets that stopped the engines from starting up. In its bid to build an operational Starship space vehicle, SpaceX has built different prototypes. The prototypes are taken through tests to confirm how the rocket can effectively and safely launch and land during flights.