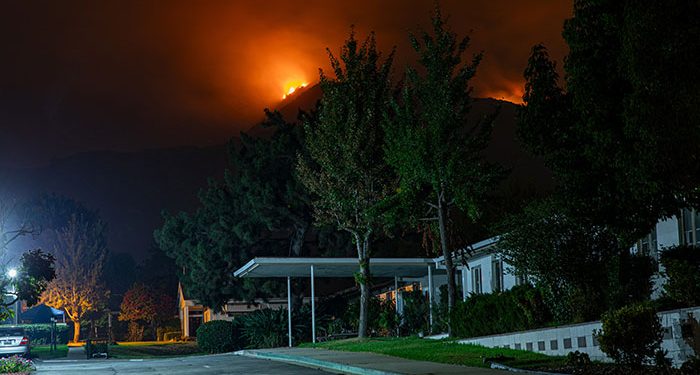 Over 100,000 people were ordered to evacuate their homes during the wildfires in Southern California, where firefighters found it hard to contain two fires that have spiraled out of control, Reuters reports. Witnesses reporting the fire incident said the fire spread so fast in a manner nobody imagined.

The flashpoint of the Silverado Fire and Blue Ridge Fire is in Orange County, California. Both fires have destroyed more than 10,000 acres of and officials reported that the Silverado Fire is the most lethal of the two fires, having grown to about four times its size on Monday.

It was a shocking scene for residents who were seen leaving in their droves. They never imagined the fire could spread so fast. Bystanders could be seen parking their cars on the roadside and watching the devastating scene.

In all, a total of 8,000 fire incidents were reported in 2020 alone, according to the California Department of Forestry and Fire Protection. It said these fires have destroyed about 4 million acres and claimed 31 lives this year. The windy and dry weather conditions in the state prompted the power to be shut down in order to prevent more damage.

In a report filed with California Public Utilities Commission, Southern California Edison identified a power cable as the source of the Silverado Fire, which has destroyed 7,200 acres near Irvine so far. There was an initial incident report that identified overhead electrical facilities as igniting the fire, however, when officials checked, they concluded otherwise.

While updating CNN on the status of the fire, SCE spokesman Chris Abel said that lashing wire connected to a telecommunications line may have come in contact with SCE’s power cables, thereby igniting the fire.

Out of an abundance of caution, power companies in California have enacted Public Safety Power Shutoff (PSPS). The speed of spread of the fires from the south and the dry, windy conditions reported in the north helped power companies reach the decision.

PowerOutage.com reported that over 300,000 thousand customers were left in the dark Monday evening. Most of the residents are customers of Pacific Gas and Electric Company and Southern California Edison.

The fires have resulted in two casualties from the Fire Department. The department said about 700 of its men were deployed to contain the fire. The men involved suffered second and third-degree burns, and are currently undergoing treatments in the hospital. When the Orange County Fire Authority Chief Brian Fennessy visited them, they were at the Intensive Care Unit.

Fennessy praised his men who, against all odds, have fought to contain the fires. He called them brave and praised their courage. The names of the two firefighters in the hospital were not released, but the report has it that they were aged 26 and 31.