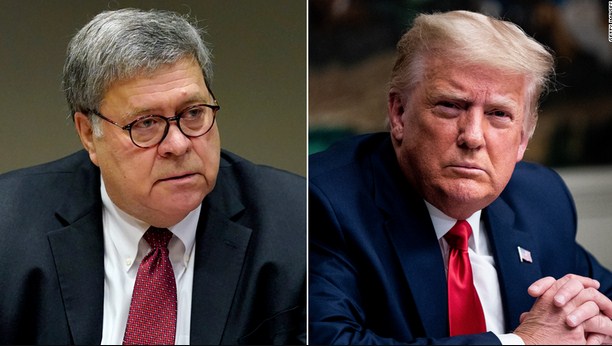 Barr, who is on his second stint as attorney general, having served from 1991 to 1993, has fallen out of favor with President Donald Trump and his supporters. The attorney general has received severe criticisms from the president in recent days following his comments that there was no concrete evidence of voter fraud as alleged by Trump and his teeming supporters.

Close associates to the attorney general revealed that he is not comfortable with remarks by the president recently and is strongly considering leaving his position before the administration winds up next month. Some conservatives are increasingly throwing jabs at Barr, accusing him of undermining the president’s efforts to overturn election result in key swing states.

Trump spoke with reporters on Thursday, saying Barr hadn’t done much to help his cause. Trump extended his grievances to the FBI, accusing them of not digging deep enough. Trump met with Barr in the Oval Office, where a lengthy, contentious meeting ensued, according to a source familiar with the matter. On Thursday, the president also refused to comment on whether he still had confidence in his attorney general.

According to close sources privy to the matter, before the election, Barr had planned to stay for some time as attorney general into Trump’s second term if the president had won a second term. However, when Biden was projected winner, Barr reconsidered his options, CNN reports.

A top aide to the President leaked to the press the news that Trump could oust Barr. However, several top aides of the president had advised against this step. The New York Times reported on Sunday that Barr has considered his future and could resign in mid-January, just before inauguration day.

In his first stint as attorney general during the administration of President George H.W. Bush, Barr had stayed on until the final days. Barr’s tenure as attorney general, which lasted almost two years, was filled with numerous controversies. He also often received sharp criticisms from Democrats.

His appointment in February 2019 saw encomiums from officials in the Justice Department, who felt he was aptly suited for the role considering his previous experience. He was hailed as someone who would protect the rule of law.

His first flop came when he poorly handled the investigation and prosecution of most Trump allies and advisers and their connection to Russian interference in the 2016 presidential election. The next faux pas occurred when he publicly berated officials of the Justice Department. When reminded of the culture he was leaving behind at the Justice Department, Barr has insisted that he considers the public perception of his tenure irrelevant.