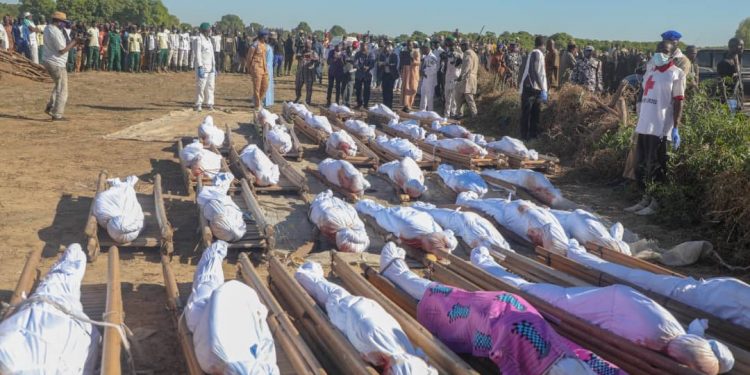 Scores of farmers were killed when gunmen attacked a rural community in Northeastern Nigeria. Witness said the gunmen attacked rice farmers who were in their farms for harvest and started shooting sporadically. The attack, officials confirmed, happened in Borno State, the Guardian reports.

Eyewitnesses counted at least 70 people who were killed in the gruesome attack. However, a United Nations official in the state, Edward Kallon, said that tens of civilians may have lost their lives in the attack.

According to Kallon, the attack was yet the most violent and gruesome attack on unarmed civilians this year. He called for the long arm of the law to bring to book the perpetrators of the dastardly act. Kallon has served as a resident and humanitarian in the North-eastern part of Nigeria that has witnessed acts of terror, kidnapping, banditry, and other crimes against the populace and government.

The United Nations Security Council condemned the attacks in the strongest terms and said that those responsible for the attacks should be brought to justice.

According to Reuters, about 30 victims of the attacks were beheaded. Villagers reported that some people are still missing, especially 10 women who were unaccounted for. No group has claimed responsibility for the attacks yet. However, Boko Haram and the Islamic State West Africa Province are the two terror groups that have carried out terror attacks in the region for nearly a decade now.

Borno State, which shares a border with neighboring countries such as the Republic of Chad and Cameroon, is a stronghold of the terror groups. Over the years, they have seized villages and established Islamic caliphates. According to the Council on Foreign Relations, both groups have carried out attacks that have claimed the lives of more than 37,000 people.

The President of the country, Muhammadu Buhari, released a statement condemning the attacks on the farmers. He said the entire country was shocked and deeply hurt by the wanton destruction of lives and properties carried out by terrorists in Borno. He condoled with the families of the victims and prayed for the repose of the souls of the victims.

About 43 of the victims were buried on Sunday. In the funeral service, the governor of Borno state, Babagana Zulum, who has been highly critical of the way and manner the federal government has handled the acts of terror in the state, called on the government to enlist more security forces to protect farmers in the area.

Zulum referenced the ironic state of things in the state, saying that if the farmers had decided to stay at home, hunger and starvation would have killed them. And yet, they stood the risk of getting killed by the insurgents if they decided to go to their farms to seek food.