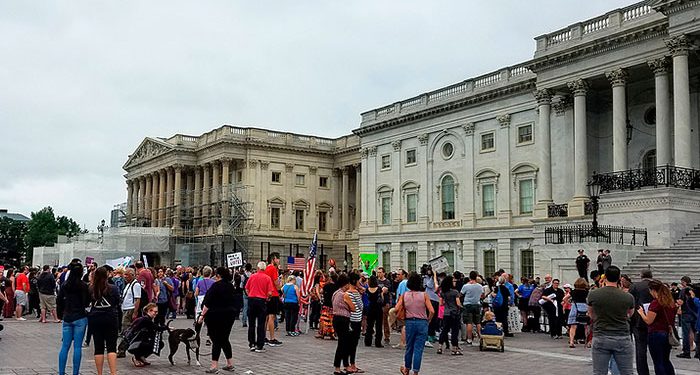 An investigation by the House Committee on Natural Resources found that the Joint Force Headquarters National Capital Region considered the use of heat technology which burns the skin against protesters at the nation’s capital on June 1. The committee found that the Provost Marshall in the Department of Defense for the DC region enquired from the DC National Guard if they had the Long Range Acoustic Device (LRAD) and Active Denial System (ADS) available for possible use against protesters.

In a written response submitted to the committee, Major Adam DeMarco of the DC National Guard revealed he received a copy email in which the Provost Marshall wanted to know if the National Guard had LRAD and ADS, but that he replied that they do not have the equipment handy at that moment.

Demarco said the Provost Marshall believed the “ADS can provide our troops a capability they currently do not have, the ability to reach out and engage potential adversaries at distances well beyond small arms range, and in a safe, effective, and non-lethal manner.” And that protesters would be dispersed quickly since the ADS “provides a sensation of intense heat on the surface of the skin. The effect is overwhelming, causing an immediate repel response by the targeted individual.”

Further investigation found that US border officials also considered using the ADS heat ray technology against migrants approaching the US border in 2018, but the secretary of homeland security at the time, Kirstjen Nielsen, shut down the idea and warned that such suggestions must never be brought to her again. However, the committee established from DeMarch that the Joint Force Headquarters National Capital Region may have considered using heat technology against protesters if they had laid their hands on it at that time.

The LRAD is a sound warning system that can be used to broadcast a warning to protesters at deafening noise levels. The system can produce a piercing and explosive voice broadcast that can be heard by protesters or massive crowds for several blocks so that people at the far back of large crowds can hear police warning to disperse before law enforcement apply aggressive tactics to scatter them.

The LRAD was part of a 2015 settlement agreement to be used by federal police to disperse large crowds, but according to investigations, it was not sufficiently used as recommended before the police fired tear gas and smoke canisters at demonstrators.

Biggest Software IPO Ever, Snowflake Valued At $70 Billion After Shares Closed At $245