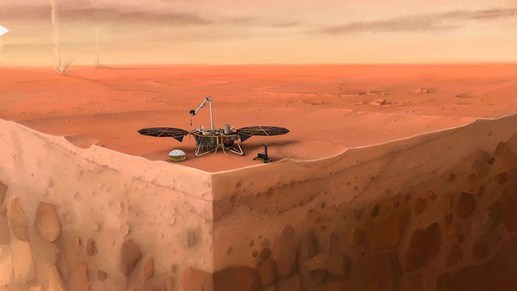 The National Aeronautics and Space Administration (NASA) announced the death of the Mars digger on Thursday after many efforts to get the digger to help scientists ascertain the temperature of the planet. The administration stated that the digger, which was supposed to borough deep into the ground to take the planet’s temperature, failed to go more than a couple of feet into the red earth.

The instrument, which was developed by the German Aerospace Center (DLR), was launched into the red planet using NASA’s InSight lander about two years ago. One month after it landed on the planet, the probe was only able to dig 14 inches into the red soil before it got stuck. Some months later, NASA tried to help the digger resume digging by using a robotic scoop to fill up the drilled space. The scoop was also to support the instrument as it resumed digging.

The plan failed, and it was followed by another plan. NASA decided, in February 2020, to use the InSight lander’s robotic arm to hit the digger continuously until it got the desired result. Again, the plan failed. The mission was put on hold until a little over a week ago when NASA decided to try working with the robotic arm again. The digger failed to dig into the surface of the planet again, and shortly after that, NASA scrapped the idea of using the probe, Mashable reports.

According to the scientists, the probe failed to get an adequate hold on the planet to dig into the soil. Tilman Spohn, a member of the German Space Agency that was the head of the experiment, said that his team worked for two long years to get the probe working on the Martian surface but nothing worked out.

“We worked very hard to get it working, we threw everything we had at the project, but we have realized it just isn’t going to work,” Spohn said on Thursday.

Spohn stated that all is not lost as the probe was able to perform some actions that will help plans to establish a human community on the planet. The scientists said they had developed the device by analyzing the soil composition of the planet using other space vehicles that had been sent there. The soil, which the probe encountered on the planet was very different from their expectations, the scientists added.

On the other hand, InSight’s French seismometer is making good progress on the planet. The device has recorded almost 500 quakes on the planet and InSight’s weather station has continued to give daily reports of the weather condition on the planet. The NASA lander will stay on Mars until the end of 2022 after it received a two-year extension.